In the end there is only one place for me to start – in the middle. In January 1999, I was 23 years old and living in a shared house in Parkville on the north side of Melbourne. I’d been there 10 months and had spent most of the time writing a screenplay about what had happened to me over the previous 4 years. It was something I had always wanted to do creatively, but I also hoped it would be therapeutic.

I’d spent New Years Eve 1998-99 in Sydney with a close-knit group of friends I had met through my mate Jules. Jules was from Geelong and we had worked together as temps for a big law firm in Melbourne. We bonded over music and he introduced me to a lot of great Aussie bands like Powderfinger and Regurgitator. Even though I barely knew Jules’ friends they welcomed me into their group as if they’d known me for years. To them I was known as, and am still known as ‘Scottish Pete’. It felt good to have a new identity for a while.

I had been working various jobs in November and December with the idea that I wouldn’t need to work that January, and I could devote myself to writing and finishing the screenplay.

In December I had been offered another temp job with a law firm in Melbourne. I’d worked there on and off during 1998 and then Jules and I were asked to supervise a big document review project that would require us to work really long days. As compensation they offered to pay us double time for the first two hours past 6pm, and then triple time for any hours worked past 8pm. I think they were paying me $16 Australian dollars an hour so this sounded like more money that I’d ever seen before.

The job was easy too. We just had to manage a library of documents in a big office on the 41st floor of a King Street skyscraper for lawyers to review and basically make sure that they didn’t try to leave with the documents. No one ever did. We had to stay there until the last lawyer would leave which would often be around midnight. My main memory of that job was going for a dump one night about 10pm and working out that I’d just earned $12 sitting on the toilet. It was a dream job.

As well as Jules and his Melbourne mates, I’d become friends with a guy from Dublin called Simon who was also living in Australia for the year. He introduced me to the concept of buying really cheap second hand suits and then going out on the town and ordering Australian champagne which was about $3 a glass. We thought we looked like millionaires but we probably looked like tramps who had just had a good day at the bookies.

Simon was a bit eccentric, but I liked that. He probably thinks I am too. He’s very intelligent, very creative, but very impulsive. Generally I like to plan things out and know what I’m going to be doing of a day, or a year. I had to learn to ignore those feelings when hanging out with him. He lived in the moment. He would only put $2 worth of petrol in his car at a time for fucks sake. But I was in the process of pushing the reset button on my life, so I went with it.

I tried windsurfing for the first time with him. He said he would teach me how to do it. We went down to St. Kilda beach, got our boards and jumped in the water. He stood up on his board immediately and then shouted some instructions at me as he disappeared across the bay. I almost drowned but I figured it out eventually. I didn’t see Simon until the next day though.

I finished the temp job just before Christmas and at the last minute decided to hitch a ride with Jules and his mates up to Sydney for New Year. It was the year before Sydney was to host the Olympics and probably the best Hogmanay I’d ever had. It was also the middle of summer and really warm. Every New Years Eve before that had been spent huddling in at home or freezing myself on the streets of Glasgow or Edinburgh.

On December 31st, 1998, we spent the morning at the beach, of course, and then a couple of us decided to go and see a Paul Cézanne exhibition at some art gallery. My reasoning was that I could justify losing a few brain cells later that evening if I’d had a healthy dose of art in the afternoon. I’d never heard of Cézanne before but the story of his life and his work really moved me. Something about the way that he painted real things, that looked lifelike, but when you looked closer you could see that everything was slightly distorted. I am not an artist at all, clearly as the previous sentence demonstrates, but some years later I painted and framed a self-portrait of myself for Farah as a jokey Christmas present. I like to think that it was inspired by Cézanne and the cover of Fleetwood Mac’s Rumors. I’m sure Paul would have been proud. 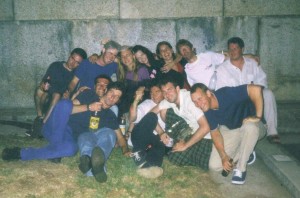 After the museum we joined up with the others for a proper Aussie barbeque, before we walked down to Sydney Harbor Bridge to watch the fireworks. I’ve never been impressed by fireworks before or since but that display was genuinely awesome. After midnight we somehow found and invaded a bouncy castle under the bridge. I’m sure it seemed like a good idea at the time but bouncing up and down after 12 cans of VB, in a kilt, was not a good idea.

It was a great day, but the Sydney trip was a bit of a distraction. I was close to finishing the screenplay and I wanted to get it done before I left Australia.

Simon didn’t go with us to Sydney. He stayed in Melbourne and told me that he would use the time to try and snog a girl that I had been seeing. I had to admire his honesty. She was a beautiful Irish girl called Liz. I met her at a bar one night on Swanston Street. I vividly remember that she jumped up to dance in the middle of our conversation when she heard the drum intro to Superstition by Stevie Wonder.

She was very pretty but I was more impressed that she recognized the song from the first two seconds of the intro. Our thing wasn’t too serious and when Simon succeeded with his bold plan to kiss Liz over New Year, I wasn’t too upset. I had something else to focus on.

So January 3rd, 1999, I got back to my house on Story Street in Melbourne. It was actually called Story Street and I probably believed that had some meaning when I first got there. My short-term plan was to leave Australia in the middle of February, visit New Zealand, San Francisco, go back to Austin and Chicago, New York and then home. I’d been accepted to study English law at City University in London later that year, with a view to moving on to a career as a barrister. So I had about 4 weeks to finish the screenplay or it would never be done.

Almost every day Simon and his Irish mates would come by my house and try to convince me to go the beach or go on another adventure. The weather was beautiful that summer in Melbourne too, and it took all my resolve to tell them each day that I was staying in to write. I’d take weekends off mind you, and go out drinking with Simon in our three-piece shitty suits on Brunswick Street, but every weekday and night I sat down and wrote.

That’s why the writing of the screenplay was my therapy and that’s why I had to finish it.

So as my new friends partied and went on adventures every day without me, I sat at a small table in my undecorated, un-air- 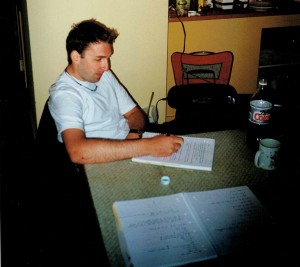 One night, towards the end of January I finally got there. I remember the moment I found the ending. I thought it, then I wrote it down. I read it back and knew it was done. I knew that I could end the spiral. I knew that I could be happy again. The realizations I came to that night on Story Street completely changed my philosophy on life. Now, 17 years later I can look back at that moment and see that every major life decision I have made since then has been based on those conclusions.

I had found an ending for my screenplay, and it was a happy one. It was the end of my grieving process and the end of my need to escape through alcohol. I also felt empowered. I had climbed out of my own personal hell, and I knew that I couldn’t be intimidated or brought down permanently by anything ever again. Not by any job, any city, any challenge, any tragedy, any person, any thing.

I have the same perspective now. Now, years later I’m trying to get a hang of writing creatively again. It’s been hard. Like going back to the gym for the first time in a decade.

This week, working on this first chapter has initiated a lot of reflection too. Positive reflection. Reading what I’ve written, I know that it could probably use some serious editing, and some structure, but there is room for improvement*. I enjoyed doing it though and I plan to keep going. I also realize that much of this story will build to that moment in Melbourne, and much of it will likely flow from it too. And that’s why I had to start here, in the middle.

* A few weeks later, I actually went back and edited this a bit. A first chapter shouldn’t actually be unreadable.